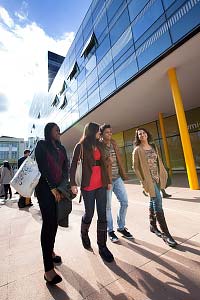 Coventry University has emerged as one of the UK's top-performing higher education institutions in a detailed analysis of teaching excellence published today by Times Higher Education (THE) magazine.

The new analysis – which THE describes as a creating a "new hierarchy" amongst UK universities – places Coventry sixth overall, and is based on the same methodology the government will use in its forthcoming Teaching Excellence Framework (TEF).

In what THE refers to as the 'mock TEF', Coventry's sixth place is well inside the top 20 per cent of institutions, which would see it classed as 'outstanding' for teaching excellence according to the government's own proposed analysis which will be piloted next year.

Student satisfaction and graduate employment are amongst the key measures used for the analysis, with universities' performances being based mainly on the National Student Survey (NSS) and a survey of how graduates have fared six months after leaving university.

The latest NSS ranked Coventry University top in the UK for personal development, which measures how students feel their confidence, communication skills and ability to tackle problems have improved during their studies.

Earlier this month the annual Destinations of Leavers from Higher Education (DLHE) survey showed that 94.5% of UK graduates from Coventry University who completed their first full-time degree in 2015 had secured employment or continued further study six months after graduating.

This new analysis offers a fresh perspective on the strengths of higher education institutions around the UK, and we're delighted to be ranked so highly. Students care about the quality of teaching they will be getting on their course and what their employability prospects are, so the THE's analysis should serve as a useful guide alongside other rankings which place more of an emphasis on research activity.

This analysis highlights the dramatically different interpretation of university performance that may be offered by the teaching excellence framework.

The government's intention with the TEF is to highlight and reward the universities that deliver for students, and to tackle those that focus on research at the expense of teaching.

While many in higher education have doubts about the TEF proposals, the fact is that the government is pressing ahead with its plans, and our analysis shows how challenging it could be for universities that have built their reputations on research strength alone.

This has the potential to impact on universities' ability to raise fees in line with inflation, and perhaps more importantly on the perception of students – both domestic and international – as they decide where to study.

The THE's analysis follows last month's Guardian University Guide 2017, which saw Coventry place 15th overall and rank in the UK's top 10 for both the quality of teaching (joint 7th overall) and the 'value-added'† score (8th overall).

To celebrate the start of the Blooms for Bees project on 20th June, aimed at promoting and improving gardening for bumblebees, Coventry University is hosting a week of...

The Guardian University Guide 2017 has cemented Coventry University as the top modern university in the UK, building on the success which saw it crowned ‘University of...