Media production students and graduates from Coventry University are to make a documentary about a 13 year-old girl's sensational scuba-dive down a 200ft fissure between two continents.

The students were invited to film the story of Charlotte Burns from Biggin Hill, who in September is set to become the youngest diver ever to explore and document the renowned Silfra rift in Iceland – a freshwater fissure between the Eurasian and North American tectonic plates.

Charlotte, who was last week announced as a global ambassador for the Professional Association of Diving Instructors (PADI), wanted her unprecedented expedition to be filmed to inspire other youngsters to take an interest in geology and diving, so she contacted Coventry University having been impressed by the reputation of its Department of Media.

A team of seven students and graduates from the School of Art and Design's media production course is already following and filming Charlotte's preparation and training, with shoots having taken place in her school – Newstead Wood Grammar – in Orpington and at the Stoney Cove scuba diving site in Hinckley.

The students will document Charlotte's journey – during which she'll be joined by eminent explorer Monty Halls – all the way to Silfra in Iceland's Thingvellir National Park, and they will then create an educational film which will be used in schools and diving centres across the world.

Silfra – whose famed waters are so crystal clear that divers often suffer vertigo – is the only place in the world where it is possible to dive between two continental plates, and Charlotte had to lobby the Icelandic government for months to be granted special dispensation from the minimum diving age of 18 years. 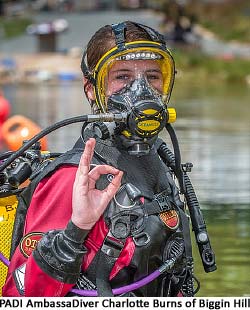 I'm incredibly excited about the dive in September, but I didn't want it to be something that only I enjoyed and benefited from. The idea for it came when I was in geography class learning about tectonic plates. I knew about Silfra in Iceland and I thought how amazing it would be to be able to show my friends in class the actual gap between continents by diving down the fissure. I wanted to be able to share that experience through an educational film which would inspire others in the same way I've been inspired. The Coventry University team has been great in helping to make that film a reality, and I'm really looking forward to seeing the finished product.

This project is an amazing opportunity which has made all of us think creatively about our professional practice. Charlotte's inspiration was great and we've used that idea of her sitting in her class and dreaming of diving down the Silfra rift to really good effect.

We've learnt so much in such a short time, and cannot wait for the next stages of the filming which will culminate in us travelling to Iceland to film the country's stunning geological features before we join Charlotte's expedition in Silfra. We are all very excited to put the final film together and share it with the world.

Charlotte's expedition is a tremendous undertaking, and it's fantastic for our students and graduates to be involved and tasked with creating a documentary to tell the story of this amazing event.

All of our media students take part in professional experience opportunities as part of their course, but this is taking things to another level – they are learning valuable lessons about how to manage a huge project and work with individuals, corporations, governments and indeed the press. They've been working extremely hard for several months already, and I'm sure that we will get a really superb film at the end.

The students have paid for the trip out of their own pocket and with the support of the University's Centre for Global Engagement, and are now looking to raise money via the crowdsourcing website Indiegogo to pay for extras to support the film, such as a drone to take footage from directly above the fissure while the dive is taking place. Sponsors can donate at http://igg.me/at/divingsilfra.