Organisers of flower festivals are being forced to adapt to increasingly early first blooming dates in spring, according to a study by a Coventry University academic which is shortly due to be published in the journal Climate Research.

Professor Tim Sparks, an environmental science expert, focused on the changes made to the timing of the popular Thriplow Daffodil Weekend in Cambridgeshire since it started in 1969 and compared them to the dates of first bloom, concluding that it has been forced to bring its dates forward by 26 days over its 46 year history. 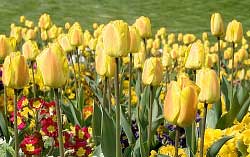 The early flowering phenomenon is caused by the UK's increasingly mild springs, specifically a mean rise in March and April temperatures of 1.8 degrees Celsius since 1969.

The study follows a report earlier this week by the Intergovernmental Panel on Climate Change (IPCC), which details the impacts of climate change – identifying vulnerable people, industries, and ecosystems around the world.

Thriplow's daffodil festival – which this year takes place on April 5th and 6th – attracts around 10,000 visitors each year to the village, and is one of many events making up the UK's fruitful flower and tree tourism trade.

Over £300,000 has been raised for charity since the daffodil weekend started in 1969, but it has faced its fair share of challenges over the years – such as in 1979 when just a single daffodil was in flower.

Unusually, the date for the 2014 festival was recently rearranged backwards by two weeks in response to the abnormally cold and late spring of 2013, which the Met Office labelled the "coldest March since 1962".

Plant tourism in the UK and around the world is pretty big business, ranging from smaller nature reserves to globally-renowned, country-wide cherry blossom festivals that have significant economic implications.

This study represents one of the first solid pieces of evidence of flower tourism having to adapt to climate change. The issues faced by Thriplow are a microcosm of the wider picture, and hopefully this research will raise awareness of the need for the industry to change to meet the challenges of rising temperatures across the world.

A new exhibition inspired by Nelson Mandela’s efforts to end apartheid is opening at the Herbert Art Gallery & Museum in Coventry on Friday 11 April 2014.

Students at Coventry University have been working with a science and technology firm on an innovative solution to a problem faced by pubs and bars across the world.

Anti-FGM campaigners Leyla Hussein and Ifrah Ahmed will be amongst a host of speakers set to talk about the challenges presented by female genital mutilation at a London...