A new study by sports scientists at Coventry University and Staffordshire University shows that anxiety about a competitive situation makes even the most physically active of us more likely to slip-up.

The research, which is set to be presented at the British Psychological Society's flagship annual conference this week, tested the anticipation and coordination abilities of 18 active and healthy young adults during two sets of identical physical tests – one ostensibly a practice, the other a competition.

In the 'competitive' trials, researchers found that the participants' coincidence anticipation timing (CAT) – or their ability to anticipate and coordinate actions akin to catching a ball or striking a moving object – was significantly worse than in the practice scenarios. 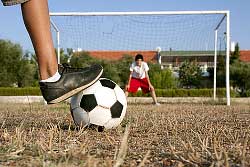 At the same time, participants' mental (cognitive) anxiety levels were found to be substantially higher during the competitive trials than they were in practice, a likely result of worrying about their performance.

The detrimental effect on anticipation timing was at its most acute during the more physically intensive parts of the competitive trials, but – significantly – was not evident during the practice trials, indicating that cognitive anxiety is a decisive factor in performance failure.

The findings support the predictions of 'catastrophe theory' – a theory popular amongst sports coaches and psychologists – which posits that sporting performance will be adversely affected by increased stress and anxiety.

Dr Michael Duncan, lead author of the study and associate head of the Department of Applied Sciences and Health at Coventry University, said:

Anxiety in a competitive situation, whether sporting or otherwise, is something everyone can relate to. We're all familiar with what we call 'somatic' anxiety, for example butterflies in the tummy which is the body's response to tension, but this study is chiefly concerned with the effects of cognitive anxieties such as worry or fear of failure.

Our research indicates that heightened cognitive anxiety, brought on by the competitive scenario, really does affect performance abilities in physically active people – and the same is likely to apply even for trained athletes.

Where this study differs from anything in the past is that we measured these responses 'in-event' rather than after performance, so we're generating a much more accurate picture of whether catastrophe theory has any value. The results strongly support the theory, which should make for interesting reading for sports professionals and psychologists around the world.

Dr Duncan et al will be presenting the full findings from their research during the British Psychological Society's annual conference at the International Convention Centre in Birmingham, May 7th–9th 2014.

Children who are exposed to scenes of nature while exercising are more likely to experience health-enhancing effects after activity, according to a Coventry University...