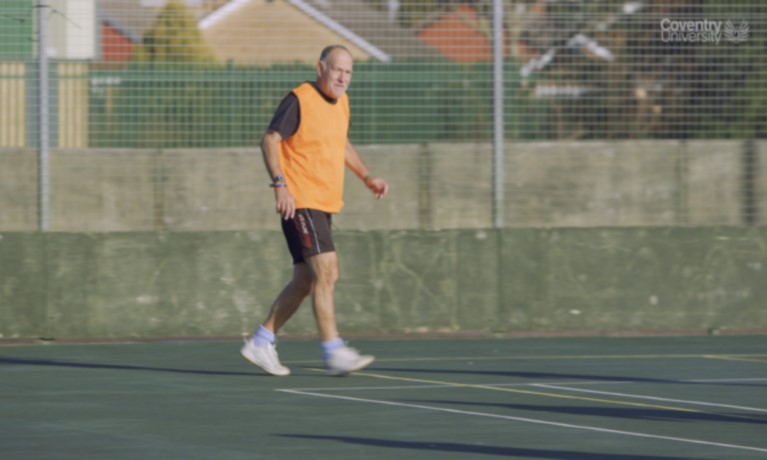 Coventry University’s Centre for Sport, Exercise and Life Sciences has embarked on a new EU-funded research project looking at the benefits of recreational football fitness sessions for adults over 60 years of age.

Under the ‘6-0 Recreational Football for Health programme’, researchers ran a series of football sessions for over 60s in Nuneaton and Coventry designed to improve functional fitness as well as offering a fun, team-based social activity for people to engage in.

Recreational football is a modified form of football where some of the rules have been changed to make it safe to engage in. Unlike walking football, running is allowed but it is also fine to just walk while playing football if participants are not able to run.

During the sessions participants wear GPS monitors to track the distance they cover in each game. The researchers monitor things such as how strenuous the activity is, how much turning force there is, and how many times the participants accelerate or decelerate. From that they can then work out the loads that are put on the human body, and they are interested to see whether that’s beneficial for an ageing population.

The EU-funded project is also being run for the same age group in similar sessions in France, Denmark, Finland and Spain.

A key element of the programme is not just going and playing football - what we’re actually looking at is the social benefit of this kind of activity. We have partners in Finland, Denmark, Spain and France who are all running the same programme. And what we’re interested in overall is, are the responses that we get in terms of health or social benefit to this programme in the UK similar or different to what we see in the partner countries?

The first two weeks, I must admit, were absolute agony and a bit like riding a bike when you haven’t done for many years – the muscles hurt that I’d forgot I’ve got! But as each week went by it was getting better and better. Now, physically I feel a real difference and I’m really, really pleased. I feel a lot better about my mental fitness and general wellbeing, from just going out and about and doing something. So yeah, I think both physically and mentally it’s been a big benefit.

Watch a video of the recreational football fitness sessions: