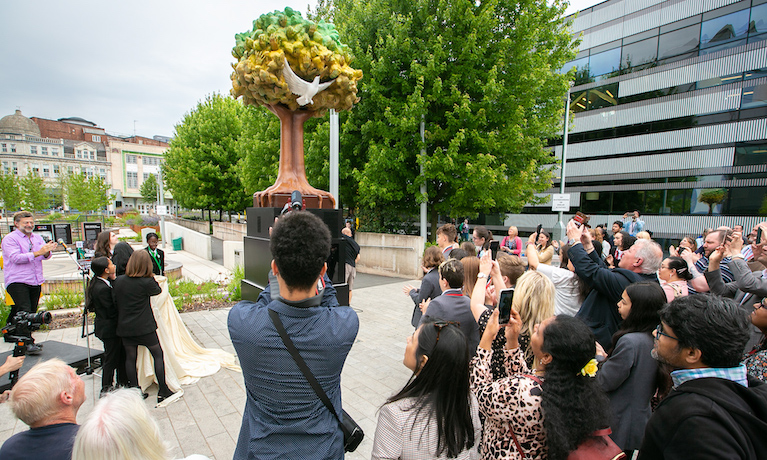 School pupils from Coventry have had a statue they designed unveiled in the heart of Coventry city centre by BAFTA award winning actor, director and filmmaker Andy Serkis.

Schoolchildren were challenged to nominate subjects for the untold stories of history they feel deserved more recognition, and to come up with statue designs linked to those stories, by the Gallery of Living History (GoLH).

Founded by Andy Serkis, film producer Jonathan Cavendish and Coventry University Chancellor Margaret Casely-Hayford, working with Artistic Director, Jude Tyrell, GoLH is a non-profit organisation inspired by recent debates around the nature of history and memory sparked by the toppling of commemorative statues around the world.

The winning entry to the GoLH competition from Sidney Stringer Academy School proposed a ‘Peace, Equality, Unity and Acceptance’ tree of hands sculpture.

Their design, which has been brought to life by Pangolin Editions Foundry, was unveiled on 23rdJune 2022 as part of an interactive plinth and statue in Starley Gardens on the Coventry University campus, right in the heart of the city centre.

The runners-up, also from Sidney Stringer Academy School, had their Pauline Black-themed concept visualised on a screen in the plinth. The lead singer of 2-Tone band The Selecter, was honoured with an OBE in the 2021 New Year’s Honours. The third-placed team from Moreton School will also have their proposal, which focused on the heroes of the NHS, visualised on screen as part of the plinth.

We are so proud of the young people who participated in this inspiring endeavour. We want our youth to consider the history they know and reflect on the stories that are not told and to play a role in shaping how we think about the stories we tell about our past and the people who populate those histories.

In turn, we hope this competition and the broader Gallery of Living History project sparks debate and continues the dialogue around how and why people and events are memorialised.

The teams are having their work brought to life on screens in collaboration with humanities, digital media and graphic design students from the Faculty of Arts and Humanities.  In addition, an augmented reality (AR) experience focusing on local heroes in Coventry and developed by students from the faculty, will form part of the broader Gallery of Living History experience. The unveiling is the culmination of the project launched in September 2021 and marks the start of the next phase in the Gallery of Living History’s development.

The first part of the GoLH project is not only multidisciplinary, bringing together research, tech, digital and artwork, but also showcases the work of young people, both from schools and the universities who, collaboratively, have engaged with the notion of commemoration, memorialisation and history, and proposed their own vision for who and what should be remembered.

The competition is part of a broader project bidding to bring untold stories and unsung heroes from local and national history to life through immersive storytelling, using technologies such as augmented and virtual reality, 360 video, projection mapping and motion capture.

Find out more about the plinth, the competition and the Gallery of Living History.