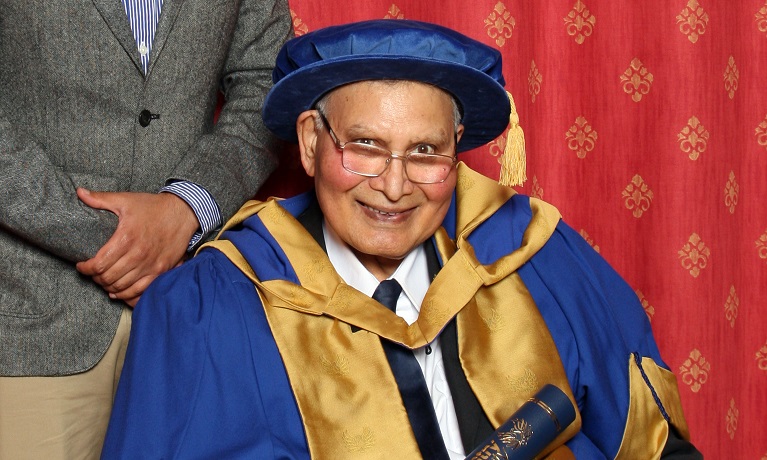 A former Rugby Mayor has been presented with an honorary doctorate from Coventry University in recognition of his outstanding contribution to inter-faith harmony and multi-cultural education.

Having been brought up in a small rural community in Pakistan, Dr James Shera MBE, Labour councillor for Benn Ward, became the first Pakistani Mayor of Rugby in 1988.

Determined to pursue a scholarship at the Catholic University of Louvain in Belgium, Dr Shera hitchhiked from Pakistan to Europe in the late 1960s, eventually moving to the UK to complete his postgraduate degree.

Passionate about the power of education to change lives, he became a teacher at Newbold Middle School, later holding several governing roles at universities and schools in the region before joining the county council education department until his retirement. James has been involved with community relations over four decades and is currently Chair of the Equality and Inclusion Partnership.

I am extremely grateful to Coventry University, not just for acknowledging my commitment to education by awarding me an Honorary Doctorate, but for giving me the opportunity to serve for six years on the Board of Governors and a further four years on the Equality and Diversity Board. It has been a huge honour and an immense privilege to do so.

At the age of five, in Pakistan, my father took me to a village school and, when I was eight, I went to a nearby city and enrolled myself in a middle school. From that day onwards, I decided that a good education was the only way to get out of poverty. I went to on college and university, in Europe, all on my own, at my own initiative, without my parents knowing what I was doing. When I left home for Europe, I couldn’t get an airline ticket. I decided to hitchhike and walk to Europe at the age of 22.

A drive to support health services has also been a key part of Dr Shera’s career. He has held non-executive directorships at a number of West Midlands NHS trusts over the years and played an important part in developing the Myton Hospice facility at St Cross Hospital and the new Warwickshire College building.

Dr Shera has received many awards for his services to the community, including an MBE in 2007 for services to the NHS and communities in the Midlands; Freeman of the Borough of Rugby in 2017; and Star of Pakistan, awarded by the President of Pakistan in 1992 in recognition of fostering good international and interfaith relationships.

He worked for Warwickshire County Council for 36 years, serving as Director Intercultural Education.

This year’s Honorary Doctorate recipients were presented with their degrees during ceremonies on 29th and 30th March.