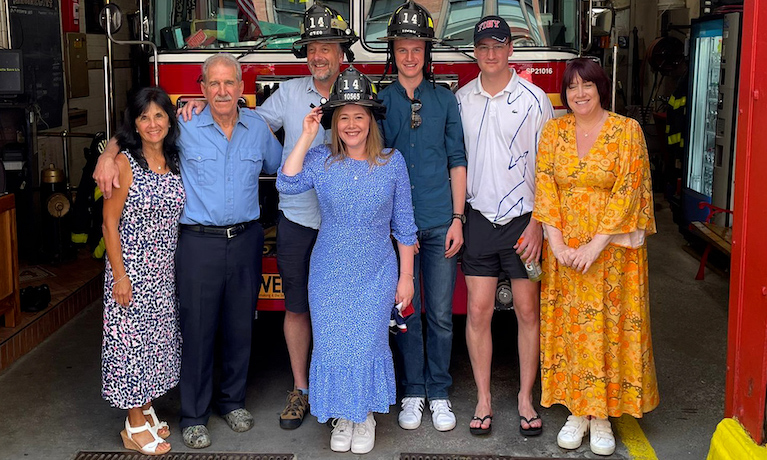 A 9/11 firefighter who developed leukemia after he retired has had his life saved by a bone marrow transplant from a Coventry University academic.

Sal Parisi, 68, was one of the courageous firefighters who bravely responded on the frontline as the US suffered tragic terror attacks – 343 of his Fire Department of New York (FDNY) colleagues were killed, with many more suffering in the aftermath of the event.

Following a 27-year career as a New York firefighter in Manhattan, Sal was diagnosed with leukemia nine years after his retirement, which he believes is linked to exposure to the devastation caused by the 9/11 attack on the World Trade Centre.

An international search for a compatible bone marrow donor identified Stephen Dawkins, Associate Head of School for Student Experience in Coventry University’s School of Media and Performing Arts, as an almost perfect match.

You can’t compare that day to anything else. Everything was pulverised, all you saw was cement, dust and steel. We were at the scene of the attacks until at least midnight that night. The biggest thing I can remember was how much my eyes were burning from the contaminated air, not thinking that 17 years later I would have cancer.

Sal’s bone marrow transplant, thanks to Stephen’s donation, was a success, granting the American hero a pivotal lifeline.

My grandchildren – six of them – were all born before I was even diagnosed, and thanks to the transplant I got to see them grow up. The oldest one is only eight now, but they were babies when I was diagnosed, and now I can play ball and get involved in sports with them all and enjoy their company, and that’s all thanks to Stephen Dawkins.

Sal reached out to Stephen following the successful transplant, and the pair met in person for the first time earlier this month, sparking a friendship.

The FDNY held a ceremony to mark their first meeting in the flesh, with film crews, captains and family members of both Sal and Stephen in attendance in New York.

I think that when you give blood, you’re aware that it could help save a life, so donating bone marrow just felt like an extension of that. It didn’t really hit home that giving my bone marrow would actually save someone’s life until I met Sal in person.

I would urge anybody who can to donate blood and donate bone marrow. Donating bone marrow is a relatively simple process, it was just two days of my life, but it was for the rest of somebody else’s life.

It was amazing to meet Sal and his family and it really did feel as though we got on like old friends.

Find out how to join the Bone Marrow Registry and donate bone marrow.