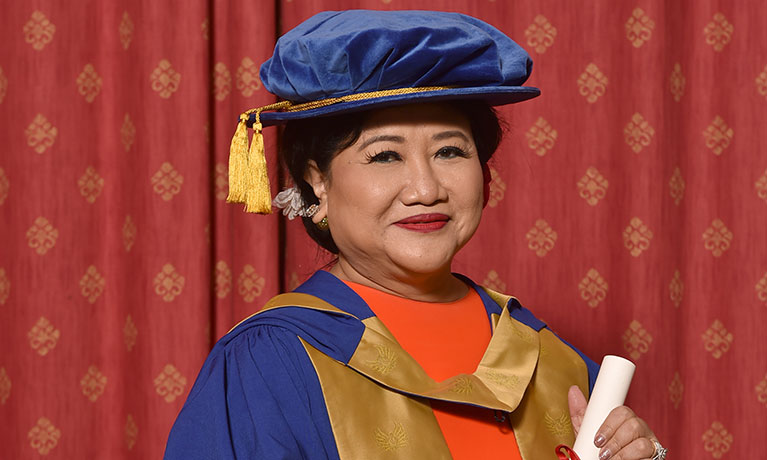 A public relations expert who has helped inspire thousands in the industry has been awarded an Honorary Doctorate by Coventry University.

It has since become one of the best-known PR schools in Indonesia, with more than 31,098 graduates over the years and in excess of 6,270 current students.

Prita has gained many accolades during her career, including the award for Best Practices in the Public Relations and Communications Profession and the Outstanding Entrepreneur Award from the Asia Pacific Entrepreneur Awards.

She also involves herself in societal issues, having founded the London School of Autism Awareness Centre, and raises awareness of environmental matters as a member of the Advisory Board of the British Council’s Climate Change Project.

I am extremely honoured to receive the award of Honorary Doctor of Arts, from Coventry University, a distinguished university. I am deeply grateful to and would like to thank the committee at Coventry University for their recognition of my work and achievements.

I will cherish this moment as one of the greatest moments of my life. I would also like to thank my family and my team at LSPR who have always been my biggest supporters

Coventry University has strong links to Southeast Asia through its Singapore Hub and academic collaborations with Universitas Indonesia and a number of other institutions in the region.

I would like to congratulate all those receiving Honorary Doctorates from Coventry University, their outstanding achievements in fields from science, IT and finance to music, sport and law, are an inspiration to today’s students.

Coventry University is proud to maintain strong academic links across the world and we are a national leader in offering fantastic experiences to international students, with more than 13,000 students from overseas choosing to study with us last year.

This year’s Honorary Doctorate recipients recieved their degrees during a series of ceremonies between 15-24th November.

The full list of this year’s honorary doctorate recipients: