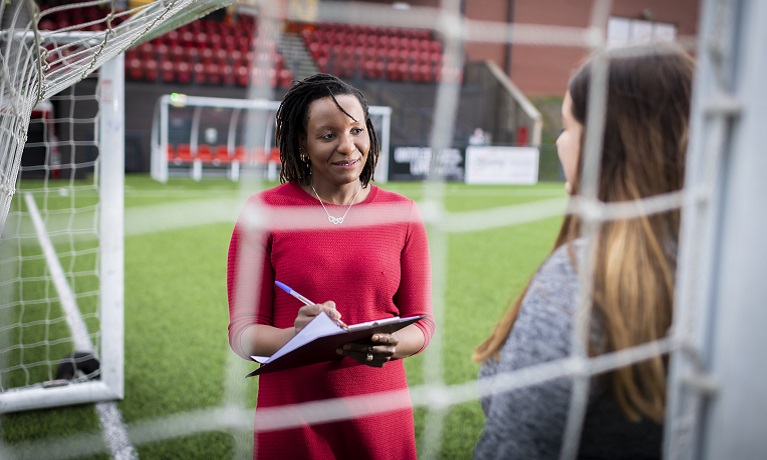 Coventry University student researchers found that in the 2020-2021 football season, home advantage in terms of goal difference fell by 50 per cent on previous seasons.

The absence of football fans in stadiums led to the loss of home advantage as away teams won more games than had been seen before the COVID-19 pandemic, research conducted by Coventry University mathematics students has found.

BSc (Hons) Mathematics and Statistics students Joseph Pym, Nisha Patel and Tharshan Balamuralee found that in the 2020-2021 football season, home advantage in terms of goal difference fell by 50 per cent on previous seasons, causing bookmakers to adjust their odds for home and away games in response to the new pattern of results. This emerging trend was due to the home team taking fewer shots at goal and scoring fewer goals, rather than the away team scoring more goals.

The research, which was part of the students’ final year projects on their degree course, also found evidence of decisions going against away teams when fans are present. Without fans present, fewer fouls were awarded against the away teams and there was no difference in the amount of yellow and red cards received by both teams on average. In previous seasons, with fans present, the away teams had typically received more yellow and red cards than the home team.

The student researchers also investigated the impact of this reality on the betting markets and found that while the bookmakers had initially underestimated the impact that the absence of fans would have on home advantage, they corrected this towards the end of the season.

The bookmakers will have typically lost money on away wins. Anyone betting on away wins would have typically been offered odds that were better than fair odds, and so would make money. On the flip side, the bookmakers would have made more profits on home wins. We also saw just how important fans are to the weaker sides in a league since it was those weaker teams that lost almost all of their home advantage, whilst the stronger teams seemed to maintain their home advantage.

The research findings show us the importance of fans at football matches and why the football industry and the media should look after them since without them, the game is poorer for us all. Referees also need to consider how the presence of fans at a match might influence decision-making. As well as resolving arguments in the pub between friends, these findings are also of interest to bookmakers and betters alike, as they have had to grapple with the impact this will have on what might be considered fair or appropriate odds to be offered by bookmakers.

The research team presented their findings at the Mathsport International Conference to a broad audience of people from academia and the sports modelling and sports betting industries. Their presentation is available to watch on YouTube.