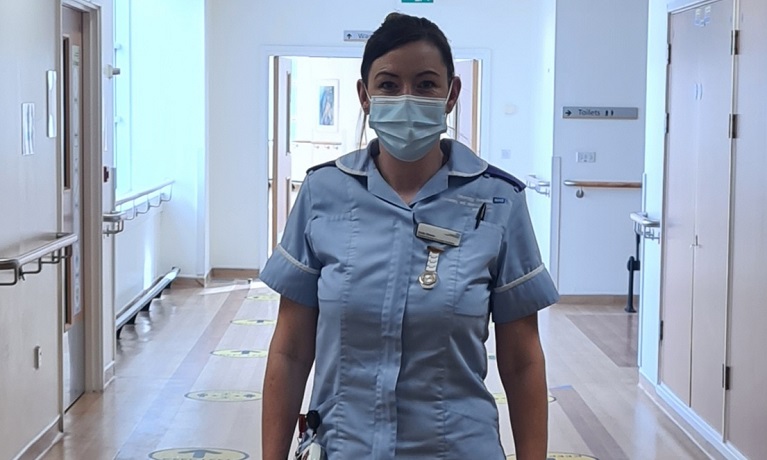 Kelly Brown’s army career prepared her for battle but she didn’t anticipate that her switch to nursing would see her on the COVID-19 frontline.

After leaving the Royal Signals, Kelly wanted to go into healthcare and find a role that would allow her to spend more time with her son Freddie, who lives with Down’s syndrome.
She didn’t think studying would be financially possible until she discovered the Nursing Associates Apprenticeship course at Coventry University.

Nursing Associates work as part of the wider nursing team in a new role designed to bridge the gap between nurses and healthcare assistants within clinical practice. The Nursing Associate role is a stand-alone role that also provides a progression route in to graduate level nursing.

Kelly spent two years as an Apprentice Nursing Associate on the respiratory wards at University Hospitals Coventry and Warwickshire (UHCW) NHS Trust, qualifying last March with a foundation degree. Kelly is now a fully registered Nursing Associate with the Nursing and Midwifery Council - and she’s already making a big impact.

My family comes first and that is why I left the army.

I was offered a respiratory role but it was a tough decision as I had just lost my mum to Chronic Obstructive Pulmonary Disease (COPD). I didn’t know if I could do it but I did and I’m glad I accepted the place.

I had no idea when I took this role that I would qualify during a pandemic but I love my job and it is perfect for me.

Now Kelly has now been nominated for a UHCW DAISY Award, with the anonymous nominator describing her as “the most kind, caring and compassionate nurse they had come across in a long time”.

The DAISY Award is an international recognition programme that honours and celebrates the skilful, compassionate care Nurses and Midwives provide every day.

Professor Guy Daly, Deputy Vice-Chancellor (Education and Students) is also a Non-Executive Director at UHCW and the lead NED for the Daisy Awards.

Kelly is just the sort of person to be nominated for the DAISY Award due to her kindness, selflessness and commitment to her patients.

I was overwhelmed by the nomination. I think it’s because I saw the difference it made to the patients to see their families on video call. People can’t come in and see poorly family members due to the guidelines - I make sure I find time to help people connect.

Kelly is also supporting the next generation in her role in practice development as a Student Nursing Associate Practice Facilitator.

It’s a great honour. The students are amazing. They were scared at the start but we have seen them grow and they love it.

Everyone is tired but we are just at the peak of the rainbow - hopefully we will slide down soon.

You can find more information on how to become a Nursing Associate here.