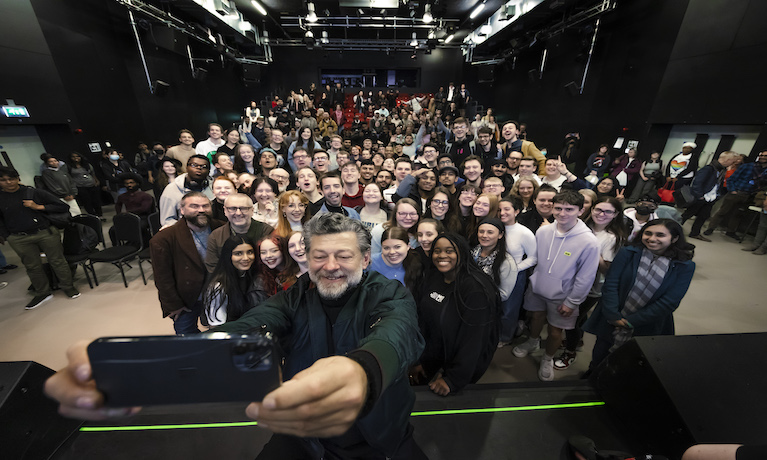 The BAFTA, SAG and Emmy award-winner spent more than two hours delivering an inspiring talk to students, offering unique insights, sharing advice with those looking to follow him into the film industry and telling tales about some of the star-studded movies he has featured in.

Best-known for his role as Gollum in the Lord of the Rings trilogy, Serkis also took a tour of the university’s arts and humanities facilities, including the development of new immersive studios on Cox Street. He also visited the Herbert Art Gallery, which sits in the shadow of Coventry Cathedral in University Square.

At the end of his Q&A session, Serkis enjoyed greeting and taking selfies with students, as well as sharing messages of encouragement with many of them. In answer to one student’s question, he said self-belief was vital to landing the biggest acting roles.

Recruiters and directors are waiting for you to be the one, they want you to be amazing. You need to go in there thinking ‘they want me’ and honestly, that goes a very long way.

His visit built on the fantastic working relationship he has established with Coventry University and the university’s Chancellor Margaret Casely-Hayford. It follows his appearance as a guest speaker as part of the university’s Degree Show earlier this year.

I have loved working with Coventry, both the university and the city as a whole. It’s such a diverse and progressive place that recognises everyone’s importance. It was a real joy to be able to share my experiences with Coventry University students and take some great questions from them too.

What’s extraordinary about this place is that there’s clearly a lot of talent here and that’s a big part of why we are here. The relationship between the university and the city is very palpable – it’s fabulous.

To have Andy Serkis here at Coventry University has been amazing. As an aspiring actor/director, hearing him speak has been really inspirational for me and his insight will undoubtedly help me on my journey.

It’s great to see someone of Andy’s brilliance here at Coventry University and taking so much time to speak to us – especially while Coventry is the UK City of Culture, there’s a really good aura around the place.