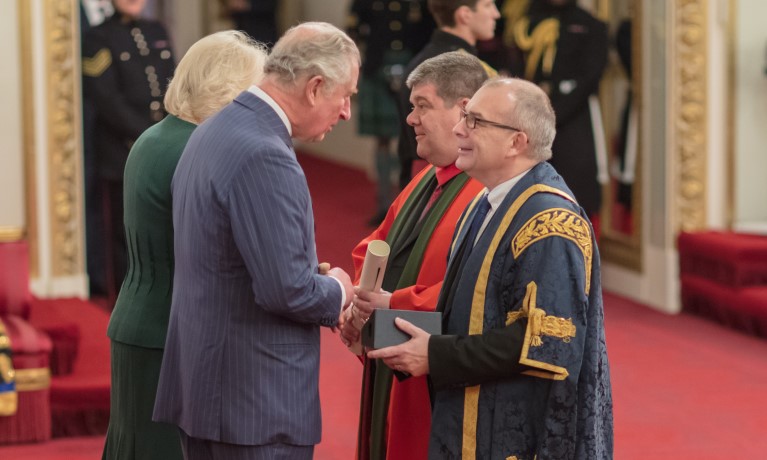 Coventry University’s Institute of Advanced Manufacturing and Engineering (AME) has been presented with a prestigious Queen’s Anniversary Prize at Buckingham Palace.

The awards were presented at an awards ceremony with His Royal Highness Prince of Wales and the Duchess of Cornwall, which celebrated achievements in higher and further education.

Queen’s Anniversary Prizes are granted by Her Majesty the Queen every two years and recognise excellence, innovation and education in the work carried out by UK colleges and universities. They are the highest national honour to be awarded to further and higher education institutions.

AME is a unique partnership between Coventry University and Unipart Manufacturing Group, it is located on the leading international manufacturer’s site in Coventry. Known as the ‘faculty on the factory floor’, it allows students to engage directly with the engineering and manufacturing industry to the benefit of themselves and the industry as a whole.

Among the representatives from the university attending the presentation were a number of current and past students who have engaged with AME to achieve excellent results within their courses and improve their employability.

AME develops skilled graduate engineers to address the growing skills shortage in the engineering and manufacturing sector. There is a need for an additional 1.8 million engineers by 2025 and 67% of UK manufacturers say they are worried about the future of skilled staff for their business.

In addition to this, there is a team of technology specialists and professors who are working together to develop new powertrain and clean energy solutions for the transport sector. Projects have included light-weight exhaust systems, fuel tanks for hybrid vehicles and battery energy storage systems working with a number of leading automotive companies.

We are incredibly proud of AME and the partnership’s incredible success so far and are honoured to have received a Queen’s Anniversary Prize.

The prize is testimony to the valuable work the partnership achieves and the students who have engaged with AME are also a shining example of the benefits the partnership can bring by producing industry-ready graduates with the skills, knowledge and expertise the sector needs.

Unipart Manufacturing Group and Coventry University share the same passions, including increasing the number and calibre of engineers and associated skills in the Coventry and Warwickshire area, as well as researching and supporting high value manufacturing and engineering. We are delighted to have been recognised with a Queen’s Anniversary Prize.