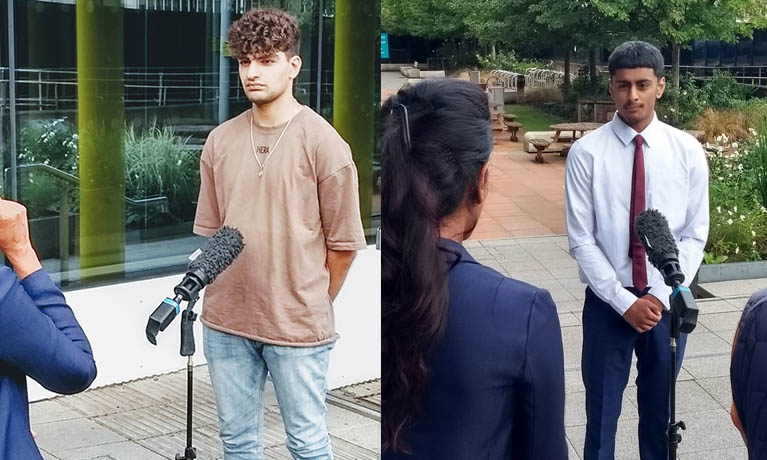 Coventry University’s early decision to accept new students based on their centre assessed grades before A level results were released has been applauded by local students who will be enrolling on undergraduate degrees with the university in September.

A level students Arman Sharifi and Muhammad Yasin from Sidney Stringer Academy in Coventry spoke of their relief at being accepted into Coventry University on their predicted grades.

The school saw 60 per cent of its pupils’ grades revised down by the Ofqual moderating algorithm, quashing the dreams of many of its students who could not access the university places or courses they had been offered.

Students from the school organised a demonstration in Coventry city centre on 16 August to protest the downgrading of their grades.

Coventry University took the position that teachers know their students best and decided to accept students based on their centre assessed grades before A level results were announced.

Muhammad and Arman were jubilant at being accepted into Coventry University based on their predicted results. Muhammad has been offered a place on the BSc (Hons) Computer Science programme, which explores some of the new and exciting areas of development in this field, such as machine learning, artificial intelligence, data science techniques, mobile app development and cryptography in software security.

Arman will study for a BSc (Hons) in Finance and Investment, which equips graduates for a professional career in the financial services sector, in areas such as investment advice, insurance, pensions, and wealth management.

The whole process of not being able to do my exams was extremely stressful, yet knowing that Coventry had already accepted me based on my predicted grades was such a relief and this was one of the best things that could have happened. And on results day, although I was stressed about the results I was going to be receiving, I knew at the back of my head that I had secured a stable degree at Coventry University. I have to really thank Coventry University for making this so much easier and such a stress relief.

I’m extremely excited to join Coventry University as it has great facilities and is high achieving. It was very helpful getting the unconditional offer from the get-go as it reduced a lot of stress and allowed me to prepare for my future early rather than being uncertain like many other people who weren’t as lucky.

The calculated grades for large and outstanding schools like Sidney Stringer were clearly unfair. 60 per cent of students downgraded, 28 out of 29 maths entrants downgraded by at least one grade and a halving of the top grades awarded. We were so proud that the students protested, calmly but with utter clarity about the injustice, and ultimately played a part in convincing the government to take the action that they did.

Coventry University has welcomed the change in policy by government to use students’ Centre Assessed Grades (CAGs) as their official subject grade, and expressed commitment to find places for students who want to enrol with the university and have the grades to do so.

Prospective students looking to join Coventry University can find out more about clearing on the university’s website.