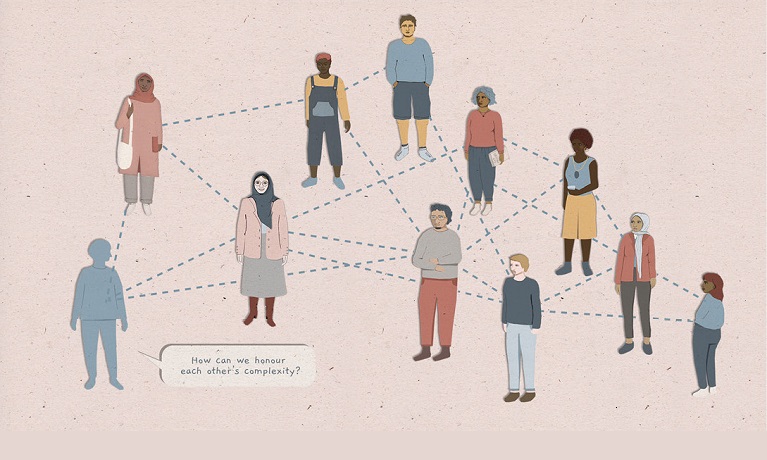 Illustration for the new book ‘Islam on Campus: Contested Identities and the Cultures of Higher Education in Britain’', Photo credit: PositiveNegatives and Sabba Khan

provide the first nationwide picture of how the 230,000 Muslims experience life at UK universities and how their non-Muslim peers view them.

Re/presenting Islam on Campus included a national survey of 2,022 students across 132 UK universities and interviews and focus groups were conducted with 253 staff and students at six higher education institutions.

The research has now been transformed into a book printed by Oxford University Press called Islam on Campus: Contested Identities and the Cultures of Higher Education in Britain.

Through her research, Sariya discovered that universities in the UK bring people of different backgrounds, faiths, ethnicities together and now she wants universities to do more to encourage inter-religious conversations.

We are recommending to universities they need to facilitate more work around dialogue.

I remember one young person telling me they felt all Muslims were mean, were terrorists and then in his halls of residence, to his horror, he found his roommate was going to be a Muslim.

He was very concerned. But he had to cook his dinner with him and they cooked chicken together. I saw him and his friends and I saw that they are a band of buddies as well.

That real raw humanness of sharing food or everyone being concerned around not failing in their course. It’s a shared understanding.

It is these informal, personal encounters brought about by the university experience that are really powerful in forging bonds of friendship, dialogue, inter-religious understanding.

In July 2015 the UK became the first country to legally require those working in education to contribute to efforts to ‘prevent people from being drawn into terrorism’.

Prevent has the potential to close down these conversations that I am so passionate about.

It is leading to mental health issues because Muslim students and staff feel the need to self-censor.

There is a definite concern about Prevent causing the Great British tradition of dissent, so only particular voices are allowed to dissent.