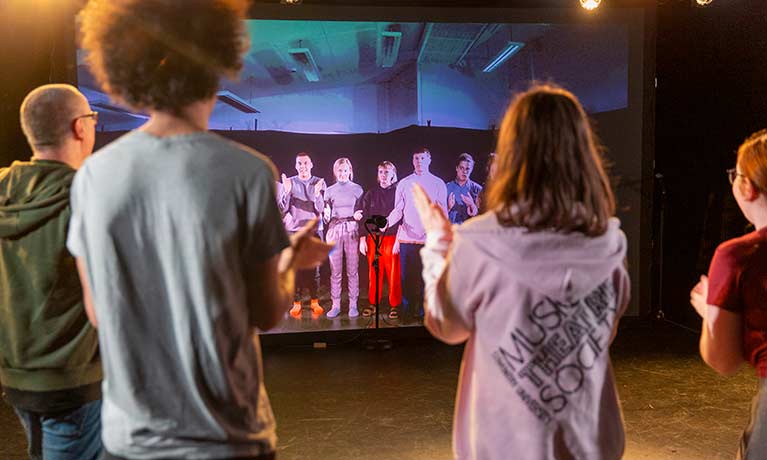 An innovative theatre project from Coventry University that allows students in two different countries to appear as if they are sharing the same rehearsal room has been nominated for a high-profile award.

Coventry University’s Telepresence in Theatre project has made the shortlist for the Guardian University Awards’ Internationalisation category.

It was named a finalist by an expert panel of judges from across the UK’s higher education sector.

As part of the project, BA Theatre and Professional Practice staff at Coventry collaborated with Tampere University in Finland to create a unique ‘immersive space’ in order to explore theatre rehearsal and arts education. This space, created in both cities, uses cutting-edge technology, life sized projection, high-speed internet connections and directional sound, giving the participants the illusion of occupying the same rehearsal room.

Highlights of the project have been:

Coventry has also collaborated with The University of the Arts, Helsinki, Gothenburg Theatre Academy, Adam Mickiewicz University, Poznan and Purdue University in the United States.

This began as an experiment in teaching between ourselves and Finland that eventually created this immersive space enabling students in both countries to work together as if they were standing in the same room.

It’s very exciting to realise we have discovered something unique in theatre and to see that it is being recognised by The Guardian. With the current pandemic limiting international travel, it gives us the ability to continue our collaboration with international artists and institutions.

All entries into the competition were judged on a range of criteria including innovation, delivery, impact and evidence. A winner will be announced on Wednesday 30th September.