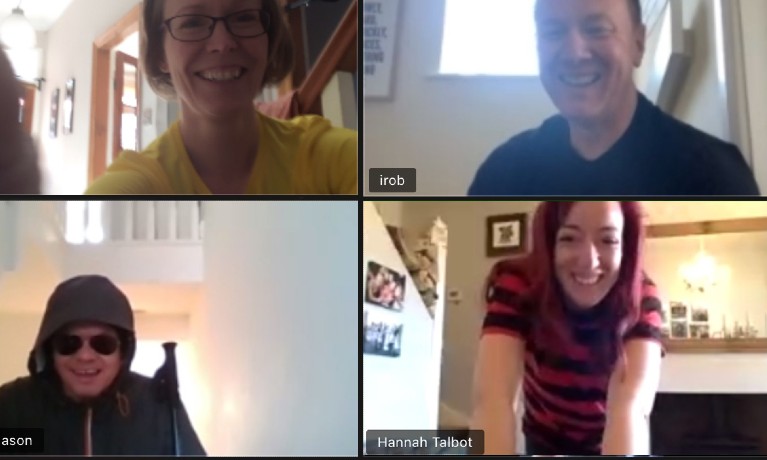 A Coventry University lecturer and her team of friends have climbed the height of Britain’s tallest mountain for charity – without leaving their homes.

Jo Mason, a lecturer in occupational therapy in the Faculty of Health and Life Sciences, and her 11 fellow mountaineers, each completed 448 ascents of the staircases in their homes to match the 1,345 metre summit of Ben Nevis in Scotland.

The group had originally planned to take part in the Coventry Half Marathon, but following its postponement decided to take on this tough but lockdown-friendly challenge instead.

They began the climb at 10am on Sunday, only taking breaks for snacks and lunch. It took around four hours to complete, with the team collectively climbing more than twice the height of Everest.

We were all of varying levels of fitness, including ultra-runners, fitness instructors, a bouncy 13-year-old, and a couple of out of shape runners. We all completed it at different paces, but we all did the last ascent together.

“I climbed Ben Nevis last year, and this was in some ways tougher – no lovely scenery for distraction and no variation in terrain. Even Ben Nevis has some flat bits!

They completed the feat to raise money for Pass the Smile for Ben, a Special Named Fund at the Children’s Cancer and Leukaemia Group, raising funds for research into rhabdomyosarcoma, a rare form of cancer, and supportive care, including nutrition and complementary therapies.

Jo’s friend Sarah started the fund in memory of her son Ben, who was diagnosed with alveolar rhabdomyosarcoma in June 2018, and who passed away a year later.

Sarah said: “Before diagnosis, Ben was a bright, happy, cheeky boy. He remained the same despite the ongoing brutal effects of his chemotherapy treatment. Even when first diagnosed he wanted to pass his smile to other people to cheer them up, and so Pass the Smile was born.

“In June last year, Ben gained his superhero wings, and he now flies high with the birds and the angels. He stays with us forever in our hearts.”

“Thank you to James, Jo, Liz, Hannah, Stu, Tanya, Rob, Ellen, Nikki, Kim and Mel, who were all foolish enough to agree to do the challenge with me.”

Jo’s advice for others looking to complete a similar challenge – other than picking a smaller mountain – is to be prepared for each stage, not forgetting the post-climb rehab. She said: “I would definitely recommend warming up, making sure you’ve got some good tunes and some friends to spur you on, plenty of snacks and drinks, and lots of stretching afterwards. If you can find someone to wait on you hand and foot for a few days after, that would also be very handy!”