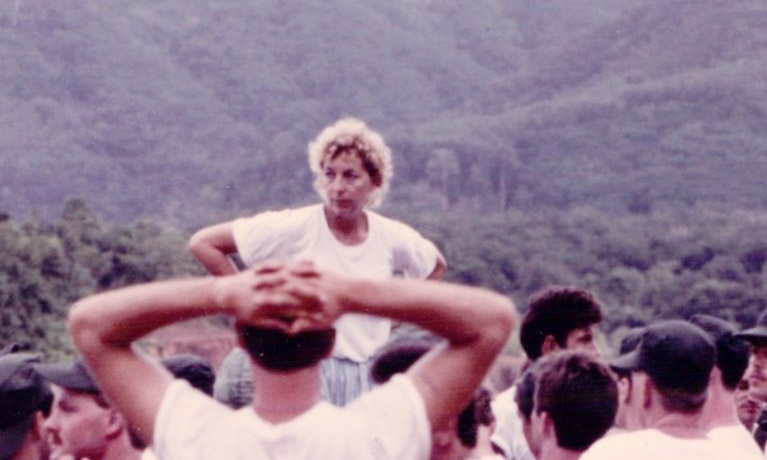 Marie Rowe on the set of Good Morning Vietnam

A Hollywood film professional has returned to her roots to help Coventry University create a series of short films to aid mental health awareness for students.

Director, writer, producer, casting director and actress Marie Rowe was raised in the Little Heath area of Coventry and studied at the Lanchester College of Technology, one of the forerunners of the university, before jetting off to Los Angeles.

She has worked closely with Hollywood stars Tom Cruise, Dustin Hoffman, Robert De Niro, Demi Moore, Al Pacino, Robin Williams, Michael Douglas and Harrison Ford but after returning to Warwickshire in 2012, she is now using her talents, here in her home city, to help create a film project in support of the well-being of university students.

Marie will cast and co-produce a series of six short films that will be developed in-house at the university by the Learning Enhancement Team and the School of Nursing, Midwifery and Health.

As well as working with top professionals in the Hollywood film industry, I have always supported up-and-coming filmmakers. In particular, I’ve been interested in working on projects that help to increase self-esteem.

Being involved as one of the team of producers on these six-short films appealed to me because with these stories, the students are given a platform in which to describe issues they might be facing. The films also show that a solution is never far away, and someone is always willing to listen and advise. No-one is ever alone.

The films are part of an online training package, which will be available for all Coventry University students and aim to offer coping strategies while exploring a broad range of issues within the student journey.

Coming to university is an exciting time for most people, full of opportunities and for making new friendships and connections; new ways of learning and for some students, a chance to live independently away from home.

However, at Coventry University we recognise that for some people these new opportunities may represent some challenges and they may need some additional help and support.

So we have taken an innovative approach to increase mental health literacy among our student population by seeking to make these films with people from a range of demographic profiles so that it will bring the topic to 'life' and inspire and encourage conversation about mental health and engender a sense that 'it is okay to not be okay' and it is okay to seek help.

We want to help our students connect, thrive and be happy.

Sean Graham has written the films and his fellow Learning Technologist in the Learning Enhancement Team Andrew Brooks is set to direct filming, once the current global COVID-19 pandemic is over.

The team want people from the local area to get in touch and play a starring role in the films, with casting to be done via the internet.

The pandemic has highlighted the need for more help with mental health issues and hopefully when it is over these films can make a real difference to our students.

We are extremely fortunate to have Marie’s talents on our small project and we are currently casting for the films.

But we need people from the Coventry area to get involved and help us make these films a reality.

We will be holding remote casting sessions and working on perfecting scripts ready to hopefully start filming when lockdown ends.

If you are aged 18-65, live in the Coventry area and want to be cast in an unpaid role in the films then please email a recent photo of yourself to: andrew.brooks@coventry.ac.uk