Clearing not a compromise for Coventry University student of the year 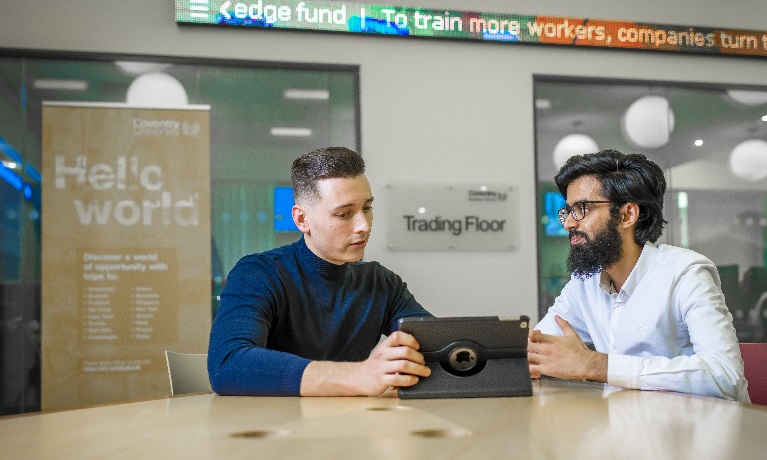 Adam Thompson, Coventry University Lecturer in Economics in discussion with student of the year Arsh Shaik

In the summer of 2016, Arsh Shaikh entered Clearing. Four years on he is Coventry University’s student of the year, with a first-class honours degree and a graduate job with a global company.

The Economics graduate says he “wouldn’t change a thing” about his choice of university as he prepares to start a role as a tax associate at PWC and wants his experiences to reassure future students.

The 22-year-old was on holiday when he discovered he had missed out on his first-choice university.

Arsh called Coventry University from holiday and within the space of 24 hours, the North Londoner had booked his spot on an Economics degree that would see him take a year in industry.

And now as he embarks on the next stage of his life, he wants school leavers following in his footsteps to know that Clearing is not a compromise and was one of the best things that happened to him.

The advice I would give to anyone who falls into the Clearing scenario is that just know it is going to be OK. Be calm and work with it.

I ended up in Clearing. It worked for me. I could not ask for a better university experience than I have had at Coventry University, I made the most out of it.

I don’t know if I would have had that same experience if I had gone anywhere else. It was brilliant. I wouldn’t change a thing.

Now as school leavers prepare to receive their results on August 13, Arsh says family support was key as he talked through his approach to Clearing.

When I found out I didn’t get in it does hit you sideways. I felt it was from out of nowhere and I thought the exams went well.

But I was fortunate that I had read about the Clearing process before and I knew that researching universities and the course was key.

I rang Coventry and said this is my situation, I would like to study economics. I’d already looked up the course and the modules online before I made that call. Already I thought if they offered it to me I would take it. They had a check, I gave them my results and I told them I was running low on my balance and they said they would call me back. I put the phone down and they rang me back straight away.

They said they would be in touch the next day or email me. On the phone they were nice, they were caring. They called me saying they had confirmation that I could study and I needed to send ID. Then I confirmed the place on UCAS and the rest is history.

And Arsh says the university experience is what you make it as he joined multiple societies and started his route to the student of the year, a first-class honours degree and a successful year in industry at Siemens in his third year.

Moving away from family was something new. I’d never left home for longer than a week before but I was looking forward to having a university experience. I was excited to start university and I just moved on from the upset over my results, I was at university doing a course I wanted to do.

I didn’t think about Clearing after I moved to Coventry. I started my first year and made friends on my course and outside my course.

I built up ambition and passion in that first year. I made friends with final-year students through the societies who had been on placements and they helped me settle in.

I had an amazing year at Siemens working with industry experts and learning a lot of real-world and professional skills. It helped with my final year and my time management.

Now I am going to be starting a graduate role at PWC as a tax associate, I’ve also set up my own business and I can’t wait for what the future holds.