From Coventry to New York, researchers from the west midlands will share findings of a ground-breaking research project with national leaders and thinkers from across the globe at the UN Summit for Refugees and Migrants this week.

The new research reveals why many refugees and migrants left their home countries to make the dangerous journey across the Mediterranean in 2015. The study is one of the largest of its kind and involved researchers from Coventry University’s Centre for Trust, Peace and Social Relations and the University of Birmingham.

As part of the Economic and Social Research Council (ESRC)-funded ‘Unravelling the Mediterranean Migration Crisis’ (MEDMIG) project, 500 refugees and migrants were interviewed about their experiences. Over three months, when the number of arrivals was at its peak, researchers spoke to people who had arrived on the shores of Greece via the Eastern Mediterranean Route from Turkey, as well those who had crossed into Europe using the Central Mediterranean Route from Libya in North Africa. The findings from the two routes will be discussed at the UN Summit in New York on Tuesday.

Results of the study highlight:

Although the arrival of refugees and migrants across the Mediterranean during 2015 was often presented as a single, uninterrupted movement of people to Europe – often using graphics depicting arrows from North Africa and the Middle East into Greece and Italy – the researchers found that these stories and images of ‘mass movement’ into Europe conceal a much more complex picture.

Researchers also interviewed refugees and migrants who had arrived in Italy after making the perilous journey across the Mediterranean Sea from Libya and North Africa. Despite the frequent portrayal of people making this journey as ‘economic migrants’, only 38 per cent cited economic factors as a reason for leaving their home country.

There was often an overlap between forced and other forms of migration.
Many interviewees said their ability to earn money and provide for their families had been curtailed due to conflict, violence and political persecution. They had often started their journey months or even years before, eventually travelling to Libya, attracted by the opportunities for work in the oil and construction sectors. Many felt they had no choice other than to move to Europe due to the escalating violence in Libya since 2014.

The researchers also found that increased migration across the Mediterranean was closely associated with difficulties in securing access to protection or work, due to newly introduced visas as well as cascading border closures in the countries people had previously travelled to. As a consequence, refugees and migrants were channelled towards Turkey and Libya – where they often could not secure a status or livelihood - and often had no choice other than to use smugglers to get out of these countries and find safety elsewhere.

The final report of the MEDMIG project will be launched in Brussels on 3 November.

The vast majority of refugees and migrants who are on the move remain in their own countries and regions of origin. Those who came to Europe in 2015 did so principally because they had been driven from their homes and found it impossible to rebuild their lives elsewhere.

"People told us that they left their countries because the violence had become intolerable and they feared for their safety and that of their families.These included a large number of Syrians, subject to almost daily barrel bombings, sniper fire and other attacks.”

Dr Nando Sigona, from the University of Birmingham who is a co-author of the report on the Central Mediterranean route, said:

The migration flow across the Central Mediterranean route is diverse in many ways. The experiences of refugees and migrants vary, but what is common for most of them is that journeys are getting longer and sea crossings are more dangerous. Journeys are often marked by violence and exploitation, especially in Libya.

“Over 75 per cent of the people we spoke to who had crossed Libya explicitly referred to experiences of physical violence. Over a quarter spoke of experiences related to death in some way. The sea journey was considered to be the only way out of Libya: those boarding the boats did not think that there was any other way of escaping”.

Dr Franck Düvell, based at the University of Oxford’s Centre on Migration, Policy and Society (COMPAS) and co-author of the report on the Eastern Mediterranean Route, said:

Our research has found that smugglers are a more complex phenomenon than typically assumed."

"Whilst they profit from, and often exploit, the needs of refugees and migrants, they are also often the only ones who help people escaping war, terror or persecution. They can only thrive due to the absence of alternative legal migration channels. And whether we like it or not, often smugglers are an essential part of the journey.” 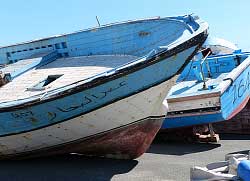