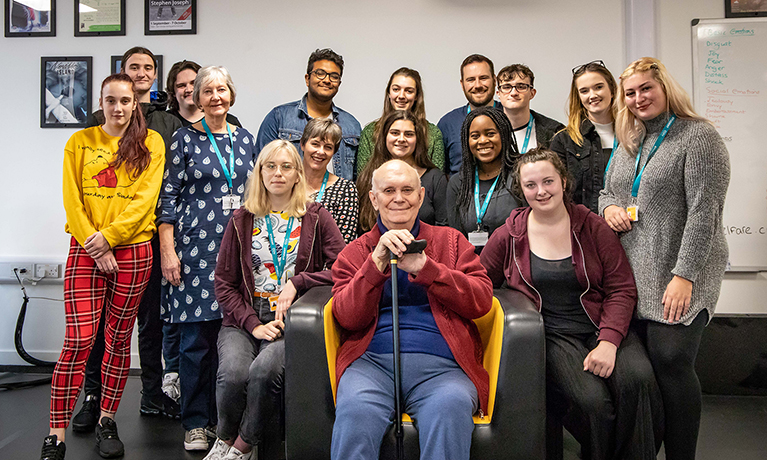 The Tony, Olivier and Moliere award-winning writer of plays such as A Chorus of Disapproval and Absurd Person Singular opened a space which will be used by those studying on CU Scarborough’s new Acting BA (Hons) degree.

Meeting the first cohort of 15 students taking the new course, Sir Alan offered sound personal advice on how to succeed as an actor before declaring the rehearsal space open by cutting a ribbon.

The rehearsal room is one of the most important rooms in my life. I spend more time there than I do in the actual theatre. For the actors, some of their most important work is done there.

Acting is a hard profession to get into. But if you really want to do it – there’s always a way in. Don’t give up, don’t be put off. With a little bit of talent, and a little bit of luck, and a lot of determination, you will make it.

Once you’re in there – don’t be too proud. Just say yes to everything.

CU Scarborough, part of the Coventry University Group, is working alongside the Stephen Joseph Theatre – which has hosted more than 80 of Sir Alan’s plays – to deliver the degree.

The course aims to get the most out of untapped talent, including in Scarborough and on the Yorkshire Coast. Unlike traditional drama schools, there are no fees for people to audition to get onto the course.

And its location means aspiring actors living in Yorkshire do not have to travel to London or the north-west to try and make it in the industry.

Sir Alan has had a relationship with CU Scarborough since its foundation – he was the first person to be awarded an honorary degree from us.

It was lovely to have him back at CU Scarborough, talking to the first cohort of students about his experiences of breaking into the industry.

This new course is fully designed with employability in mind. It will not only enable our students to be excellent actors, it will also give them the skills they need to actually make a living as an actor too, such as how to promote yourself in an effective way.

We want to see dramatic talent flourish - and this course will help make that happen.