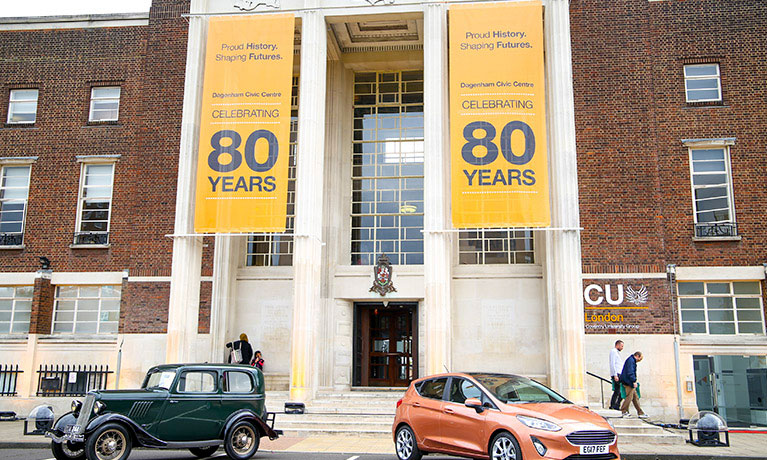 CU London will launch at the 80th anniversary of the Dagenham Civic Centre.

A double celebration is set to be held as east London’s new university campus is officially launched and a local landmark marks its 80thanniversary.

Coventry University is set to launch its new campus CU London, based at Dagenham’s former Civic Centre, on October 13.

The event coincides with the Civic Centre’s 80th anniversary, and members of the community are being invited to join in with the celebrations.

The occasion will be an opportunity to share memories of the Grade II listed building, learn more about its heritage and find out about its multi-million pound transformation into CU London.

Residents old and young will be able to go along to the Civic Centre from midday to 5pm to enjoy afternoon tea and see a gallery of photos of the venue, old and new.

The very first CU London students will be creating a time capsule which will include messages about what they would like to achieve, to be opened on the Civic Centre’s 100th birthday in 20 years’ time.

Those living in the area are being asked to submit photographs and newspaper cuttings featuring the Civic Centre for the gallery which will be on display at the event, and local people who share their 80th birthday with the Grade II listed building are also being asked to get in touch.

We are delighted to be launching our new campus in Dagenham while celebrating such an important anniversary for the Civic Centre.

The Civic Centre is an iconic east London landmark which is in the heart of the Dagenham community, so it is only right that we celebrate its past while also looking to its future.

We hope to welcome residents who have stories to share about the Grade II listed building as well as school children who can learn more about its heritage as well as the new kind of university education we are bringing to the area – offering students flexible learning options and lower tuition fees.

We are now asking residents who have photos, newspaper cuttings or stories to share to get in touch. We also hope to hear from those sharing their special day with the Civic Centre.

Anyone who would like to contribute to the exhibition or is celebrating their 80th birthday on October 13 can get in touch with the marketing team by emailing cul@coventry.ac.uk. Further information about CU London.

CU London provides life-shaped learning through a number of full-time and part-time courses, all of which are awarded by Coventry University.

It provides a high-quality and low-cost career focused model of higher education, offering lower fees and lower entry requirements - all of which will make higher education more accessible.