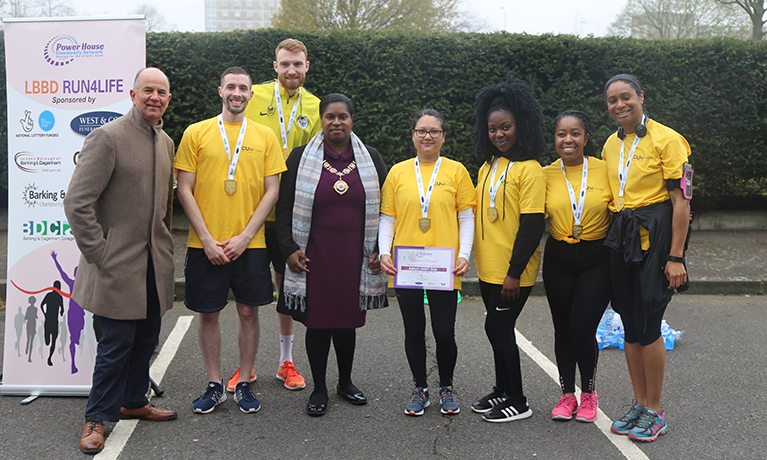 CU London staff take to the road for charity.

Staff at CU London got together to pick up the pace for a popular community fundraiser.

Barking and Dagenham locals took to the streets of London to raise money for a range of charities at this year’s Run4Life, including staff and students at CU London.

Over 180 runners of all abilities took part in the charity run, raising funds for a variety of local and national organisations.

CU London, based at the former Dagenham Civic Centre, hosted the event, as runners embarked on 5k and 10k routes around Barking and Dagenham, including their own team of eight staff members.

Participants set off from CU London’s main site, heading out onto local roads and around Central Park, before returning to the start line before a crowd of spectators.

The run went extremely well. Everyone who took part really enjoyed themselves and got into the spirit of the day.

We are looking to grow participation each year, and it was great to see so many people turn up and raise money for local charities.

We decided to get involved to help local charities raise money, and to make links within the local community. We have been officially involved for the last two years, and it’s been a fantastic way to connect with people living in the area and to encourage student wellbeing.

A team of eight represented CU London, and everyone put in a great effort. It was hard to miss us in our yellow CU London t-shirts! It would be great to see the event return again next year.

We wanted to enable various charitable groups within the borough raise funds for their cause and to promote peace, lift community spirit and improve relationships within the wider community.

We also wanted to improve health and wellbeing in the area.

The event this year was fantastic, and the support from CU London, local businesses and the local authority gave the event a great spotlight within the community.