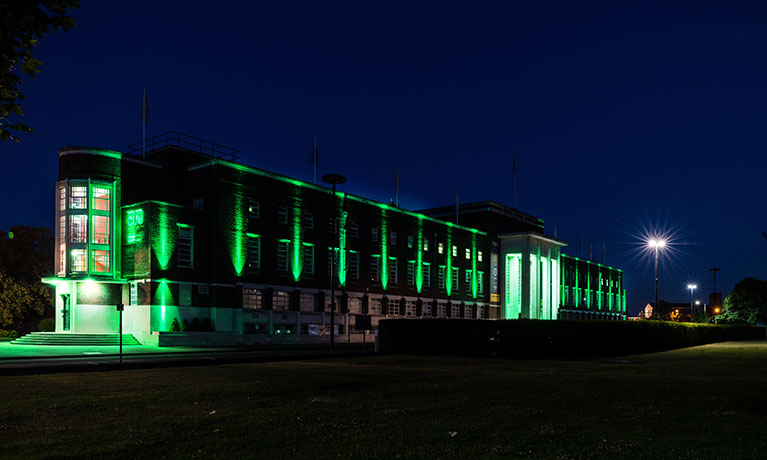 CU London participates in Green for Grenfell Day, the brainchild of Grenfell United, a group set up following the tragedy by some survivors and their families.

Two of the borough's most iconic buildings turned green for Grenfell this week, as the borough marked one year since the west London tragedy.

The Town Hall, in Barking, and the former Civic Centre in Dagenham, which now houses CU London, will be bathed in an emerald glow from the evening of Wednesday 13 June through to Monday 18 June.

Green for Grenfell Day, which takes place on Friday 15 June, was the brainchild of Grenfell United, a group set up following the fire by some survivors and their families, with the aim of bringing communities together and promoting unity and diversity.

The day before, Thursday, 14 June, marks one year since the Grenfell Tower fire, which claimed the lives of 72 people.

Councillor Saima Ashraf, Deputy Leader of the council and Cabinet Member for Community Leadership and Engagement, said it was important to support the Grenfell legacy.

The public outpouring following the tragedy shows how strong and powerful a community that is united can be.

People from all backgrounds - different religions, different jobs, different interests, all came together to support those affected and that is why we are standing with the survivors and those affected to share their powerful message of unity and diversity.

As well as going green, a minute’s silence was held on the anniversary at noon outside the Town Hall and at CU London – an educational subsidiary of Coventry University Group.

The Coventry University Group is defined by its mission, vision and values, which align strongly with the importance of a relevant and connected higher education offer in the heart of a diverse yet united community.

At CU London we are proud to show our support and mark our respect by this simple show of unity with those whose lives have been so tragically affected.

Grenfell United called on schools and community organisations up and down the country to join the Green for Grenfell Day commemoration on Friday 15 June, and celebrate their unity by wearing green.