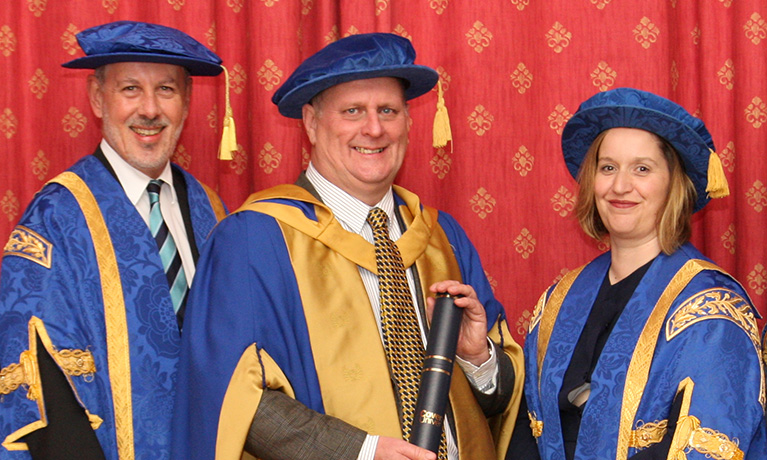 A man who played a key role in the economic regeneration of Scarborough for more than a decade has been recognised with an Honorary Doctorate.

Jim Dillon, who retired as chief executive of Scarborough Borough Council earlier this year, was awarded an Honorary Doctorate of Education during the graduation ceremony at Coventry Cathedral.

Jim was presented with his scroll following a eulogy by Kay Fraser, Associate Pro-Vice Chancellor of CU Scarborough.

Kay said he had made a significant contribution to the regional economy – part of which was the establishment of the new campus in the town with Coventry University.

Scarborough is a seaside resort, which can trace its origins back to prehistory. As the centuries rolled on the fortunes of the borough waxed and waned, arguably peaking in the Victorian era as a wealthy spa town.

Jim recognised the importance of this long heritage and has been instrumental in helping to bring millions of pounds of inward investment into the town to support its regeneration and sustainability.

Key amongst these has been the refurbishing and revitalising of important parts of the town’s seafront built-environment, including redevelopment of the historic spa, and installation of £15 million worth of sea defences along the Scarborough coastline, which fronts on to the unforgiving North Sea.

Culturally, Jim was a key driver of the redevelopment and re-opening of Scarborough’s iconic Open Air Theatre, which has attracted world class performers such as Elton John, Sir Tom Jones, Britney Spears and Kylie Minogue to the resort.

Jim has also championed sports, bringing the Tour de Yorkshire to Scarborough over many years and supporting the multi-million-pound redevelopment of a former coach park, which now includes a football stadium and a leisure village to encourage fitness and well-being.

He has been instrumental in the development of the academic portfolio at the campus, advising on the tender processes for apprenticeship bids to support the aspirations of the town’s youth, and working closely with the University to develop student accommodation in the town.

In recognition of his extensive contribution to the economic regeneration of Scarborough through educational, cultural and sporting developments, Coventry University, by decision of the Academic Board, had the privilege of conferring the Degree of Doctor of Education, honoris causa, on Mr Jim Dillon.

I am thrilled to have been awarded this Honorary Doctorate by CU Scarborough.

One of my proudest achievements is to have played a part in making Scarborough a University town so to be recognised in this way is wonderful.

So many people have worked extremely hard to grow the economy in Scarborough and it’s vitally important that everyone continues to work together to attract investment to the region.