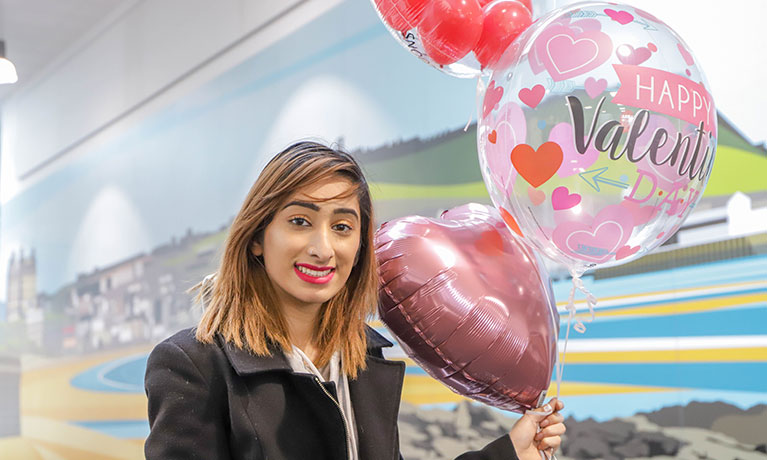 A Business Management & Leadership student has successfully launched her own business after studying the entrepreneurship, enterprise and innovation module of the course.

A Scarborough student is reaching new heights after launching her own business selling personalised balloons that was inspired by a birthday gift.

Sabah Tariq, a second year Business Management & Leadership degree student at CU Scarborough, has launched Sabah’s Balloons, a business selling large balloons which can be customised for any occasion.

The 20-year-old thought-up the idea while studying the entrepreneurship, enterprise and innovation module of her course where she was required to pitch a business idea and create an investment case.

She was inspired to focus on personalised balloons after receiving one herself as a birthday gift, and has now launched the business after finding there was a gap in the market for the products in Scarborough.

Sabah successfully applied for £600 from The Start-Up Loans Company, part of British Business Bank, to help purchase materials and launch her business.

The balloons are now being sold through the Instagram account Sabah’s Balloons and are available for local delivery. They can feature lettering and be filled with confetti, feathers or smaller balloons.

I initially came up with the idea to use as part of a piece of coursework, but after exploring it further I found that there was a gap in the market in Scarborough which motivated me to turn my idea into a reality.

I have had a lot of support from my tutors and family, and a start-up loan has provided me with the funding to launch the business.

The customisable balloons are perfect for any celebratory occasion and I have really high hopes for the business. I already have a number of customers lined up which is really exciting.

If my business is a success in Scarborough, there’s huge potential for me to expand into Birmingham.

It’s a large multi-cultural city so I know there will be a number of people that the balloons will appeal to, and I have family living in the area who are really keen to support me.

Sabah is originally from Birmingham and joined CU Scarborough, part of the Coventry University Group, due to its teaching model which sees students study one module at a time.

Despite just launching the business, she already has her sights set on expanding Sabah’s Balloons into her home city.

It’s excellent to see one of our students launch their own business.

Sabah noticed a gap in the market in Scarborough and successfully applied for a start-up loan which she has used along with the knowledge gained during her degree to launch the business.

She already has ambitious growth plans and we wish her every success for the future.”