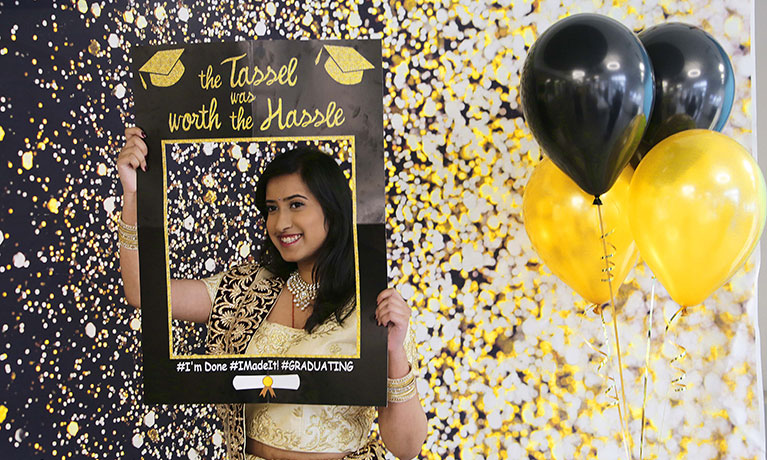 A postgraduate student says she would never have imagined herself continuing her studies were it not for the highly diverse course she took at CU Coventry.

Pooja Rathod, who recently graduated with a BSc in Biological and Chemical Sciences with First Class honours from CU Coventry, said the broad range of topics on her course had given time to consider her future career path.

Though she had not intended to study beyond her undergraduate degree, Pooja says the variety of the modules and interdisciplinary nature of the course at CU Coventry – part of the Coventry University Group - prompted her to progress her education to master's level in the North of England.

I had always wanted to become a medical professional but I didn’t have a particular profession in mind when I left school.

I have always been interested in health and sciences related to the human body, so studying science at CU Coventry suited me perfectly as it introduced me to different disciplines.

We were introduced to a new subject area every six weeks which kept the course fresh and engaging.

As well as immersing herself in her studies, Pooja played an active part in campus life during her time at CU Coventry.

Pooja said: “I was a student ambassador for CU Coventry, which involved introducing students to Coventry and showing them around the state-of-the-art Mile Lane campus. It was really rewarding.”

Originally from Leicester, Pooja also singled out Coventry for praise, describing the city as a home away from home.

Pooja said: “My parents and my sister came down to Coventry for the graduation ceremony at Coventry Cathedral and they absolutely loved it – they could see why I’d been so happy there.”

Pooja is now studying for a Master of Physician Associate Studies and says her time at CU Coventry was the perfect grounding for further education.

The course and my experience as a whole really set me up for continuing my studies.

I definitely wouldn’t be studying for an MSc if it hadn’t been for CU Coventry. I can’t speak highly of enough of my time there.