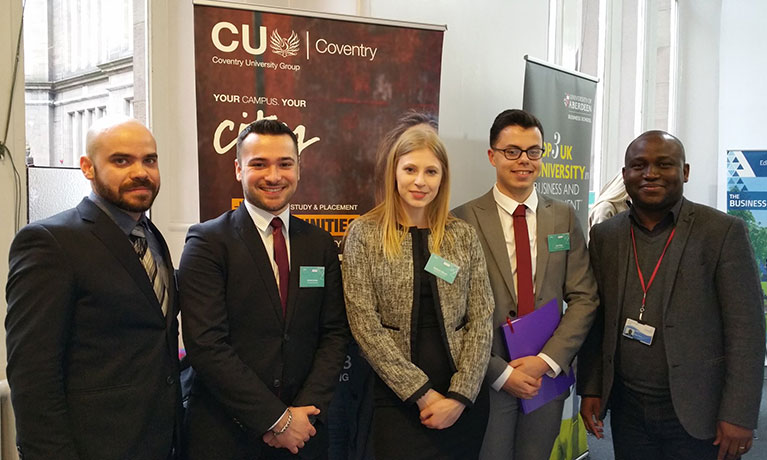 Two CU Coventry students triumph in a national contest to identify the best young sales talent in the UK.

Two students from Coventry have triumphed in a national university contest to identify the best young sales talent in the UK.

The contest, held at Abertay University in Dundee, saw students from universities across the UK demonstrate and hone their sales skills while receiving feedback from industry experts.

The competition included a series of sales meetings which challenged the students to sell under real life conditions to major players including San Francisco-based software and enterprise firm Salesforce, which sponsored the event, as well as banking giant RBS, IT insights specialist Gartner and the Association of Professional Sales.

They were joined by sales and marketing course leader Bentil Oduro and management and leadership lecturer Marion Greenhalgh who also sat on a number of the judging panels.

It is the first time CU Coventry has taken part in the annual contest, organised by Professor Tony Douglas from Edinburgh Napier University and Dr Gary Mulholland from Abertay University.

Natasza and Jack will join other winners from the heat to go head-to-head against the best in Europe at the next round of the competition which will be held at Edinburgh Napier in May.

The competition was a fantastic opportunity for business and education to come together in a competitive environment, and we are very proud of our students who entered. It gave them a great opportunity to network with professionals and undoubtedly will help them in their future employment.

They took part in a speed sales contest and a variety of role plays.  Their preset scenario allowed them to research and plan a sales pitch which they had to present to industry experts.

This meant they had to be able to not only give a well-researched presentation but also think on their feet and respond to any challenging questions.

Sales skills are an important part of any business and we feel that the sales and marketing degree programme at CU Coventry not only gives them a wonderful academic foundation in the subject but prepares them for effective careers in their chosen fields.

It was a tough competition amidst a group of very talented students from a range of very good universities and an excellent learning opportunity. It has given them a real chance to apply the skills they have developed through their degree as well as the opportunity to network with industry leaders.

All of our students did well and we look forward to accompanying our two winners to the European finals in May.