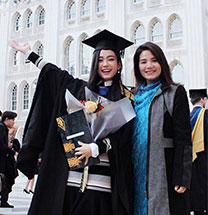 Joey Leong, whose filmography includes blockbuster Asian movies such as Blood Ties (2009), The Second Coming (2013) and Our Sister Mambo (2015), has been studying a one-year top-up course at Coventry University London and will receive a BA Honours degree in Global Business during her graduation ceremony in the City of London’s historic Guildhall.

Following success in her Sijil Pelajaran Malaysia (SPM) studies – Malaysia’s GCSE equivalent – Joey went on to study a Foundation in Arts course at HELP University in Kuala Lumpur, before being awarded an International Scholarship to study at Coventry University London.

Singer, songwriter and actor, Joey has spent the majority of her life pursuing creative ventures both at home and abroad, working on movies, solo albums, and advertisements across Asia.
When it came to choosing her degree subject Joey decided to come to the UK and hone her business acumen, continuing her studies through Coventry University London’s one-year Global Business BA (Hons) top-up course.

"I can't wait to attend the commencement ceremony to be an official graduate!"