Top 10 coolest things to do near campus 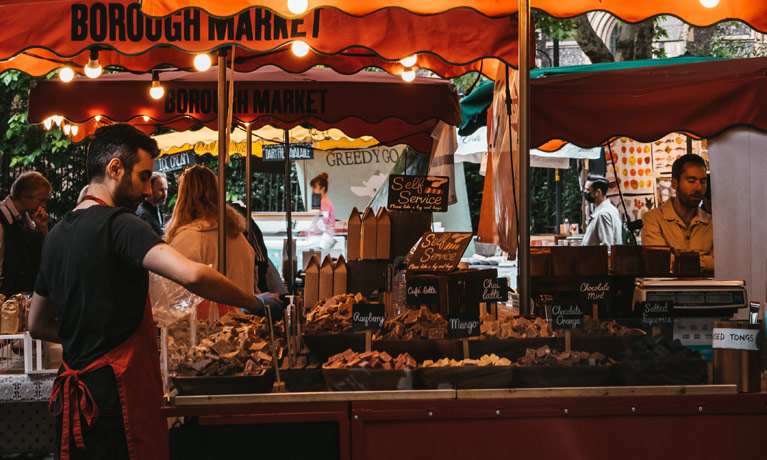 With so much to do in the capital, we’ve picked our top 10 things to do near campus to get you started.

It’s easy to see why London has consistently been rated the world's best city to be a student1. With over 18,000 restaurants2, 3,000 parks3 and close to 40,000 pubs and bars4, you’ll never find yourself short of things to do. With so many activities to choose from, we’ve picked our top 10 things to do near campus to get you started. All of these attractions take less than 35 minutes to travel to from our City of London campus*.

The Sky Garden, situated on the 43rd Floor of the ‘Walkie Talkie’ skyscraper, offers lush greenery with 360-degree views of the London skyline. Watching the sun set over the city from London’s highest public garden5 will cost you absolutely nothing – as the Sky Garden is free of charge (provided you book a free ticket in advance)!

15 minutes from campus by bus

Over its 1,000 years of operation, Borough Market has transformed from a wholesale market for London’s greengrocers, to a favourite dining spot among London’s foodies. Made up of more than 100 stalls, restaurants, bars, and shops, it’s home to some of the city’s trendiest food retailers, who serve up everything from artisan cheeses and authentic Spanish tapas, to Indian, Iraqi and Thai street food.

Columbia Road’s Sunday market is a haven for plant-lovers, stocked with a colourful range of flowers, houseplants and herbs. Head down to take in the sights, scents and to snap some awesome floral photos.

This cocktail bar allows you to connect with your inner child by jumping into one of its two massive ball pits. With a packed schedule of events and loads of mid-week deals on food and drinks, it’s definitely one to check off your London bucket list.

25 minutes from campus by train

The ArcelorMittal Orbit structure is a distinctive part of the London skyline and the tallest sculpture in the UK. Designed by renowned sculptor Anish Kapoor for the London 2012 Olympic Games, it’s also home to the world’s longest tunnel slide. Visiting the slide gives you the opportunity to experience breathtaking views from the sculpture’s observation platforms, before completing a hair-raising descent down the tower’s 114 metres in just 40 seconds!

22 minutes from campus by train

Victoria Park provides East Londoners with an escape from the hustle and bustle of city life. Inside the park’s 861,800 square metres, you’ll find two lakes, a boating pond and two cafes, as well as football, cricket and tennis facilities. It’s also a great place to go for a bit of dog-spotting.

33 minutes from campus by train/walking

Experience unique views of the city by taking a ride over the Thames on Transport for London’s cable cars, which reach heights of 90 metres. Landmarks that can be seen on the journey include Canary Wharf, St Paul’s Cathedral, the Shard, The O2 and the Queen Elizabeth Olympic Park.

15 minutes from campus by train

Take a dip in this Olympic-size, heated outdoor swimming pool for only £5.25. There’s also a large sunbathing area where you can soak up some rays.

See donkeys, sheep, goats, bunnies and a pig at this free community farm and gardens. Make sure to check the website for additional events, such as craft workshops and animal meet-and-greets.

Brick Lane’s wealth of curry houses, set up by Bangladeshi migrants to the area in the 1970s, have seen it named as London’s curry mile. Although numbers of curry houses have declined since their heyday in the mid-2000s, there are still plenty of places to grab a tasty and affordable meal, with the added bonus of supporting a local business.

* Travel times based on data from Google Maps.