My time in South Korea 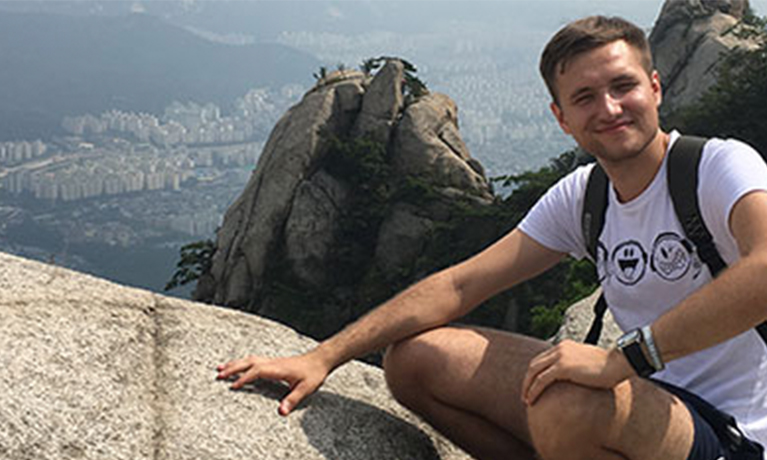 Sebastian was one of our European students, enjoying his time in England after coming to us from Romania. He was in his third year of International Relations BA when he wrote this blog.

Sebastian was one of our European students, enjoying his time in England after coming to us from Romania. He was in his third year of International Relations BA when he wrote this blog.

Sebastian is passionate about Korean culture and got to go on the trip of a lifetime as part of his course. He studied in South Korea on a year-long placement and this is what he had to say about his experience.

My name is Sebastian Manican and I am 21 years old. I am a young European student of Romanian origin, currently in my third year (abroad) at Coventry University. Not long ago I developed an interest in Korean culture, which fascinates and amazes me more and more as I learn many things about it. If I make it in politics in the future, I will try to bring the Korean culture closer to the Romanian one, as I have realised that we have a lot in common, from traditional recipes to vocabulary and traditions.

I believe that this global university experience will give me better skills, which will help me deal with political challenges in the 21st century and I will use my knowledge to bring the Korean nation closer to European ones. Moreover, with this opportunity I’ll have the chance of building bridges between these two countries by showing the world their real cultural values.

Loving life at the Yonko games

The start of my trip

I arrived in South Korea on the 22nd of August. I still remember that it was a really warm and humid day and I couldn’t breathe. My first impression was that I had come to the hottest country in Eastern Asia and I wouldn’t survive for 9 months! When I first stepped outside Incheon International Airport, I realised that I was completely alone in a totally new environment. Luckily, I had a Korean friend I had made in England waiting for me at the airport. It helped me very much seeing a familiar face on another part of planet.

From the beginning I took part in different events that were organised by the University. Maybe the most important were the `Yonko Games`, where I witnessed the best cheering ever. This competition involves a battle in sports between two of Korea’s best universities, Yonsei University and Korea University, a bit similar to our ‘Varsity’ games.

At University the classes are fascinating. I have a module called ‘Politics and Society in North Korea’ where I got to meet someone from North Korea and hear his heartfelt story. He told us how he managed to escape.

We receive our grades in the American system of grading and we have midterms and final exams, so it’s a bit different from the British system.

The place is absolutely breath-taking with so many mountains and temples surrounding Seoul. They have so many monuments and good places to visit in the city such as night clubs, shopping streets, malls, Korean restaurants and places where they serve street food.

All of these are giving Seoul a distinct beauty that transforms this city into one of the most beautiful cities in the world.

Security is very high in Korea. I’ve never felt unsafe here. You can walk freely at every hour day or night. You can leave your phone unattended; you’ll find it there unmoved, and the list goes on.

To conclude, I strongly recommend that British people visit Korea because here they will find something that could be named as a ‘home away from home’, with beautiful and kind people that will make you feel one of their own.